More drivers are taking advantage of the new and improved transportation options provided by the Louisville – Southern Indiana Ohio River Bridges Project. Traffic on the three tolled bridges — the new SR 265 Lewis and Clark Bridge, the new I-65 Abraham Lincoln Bridge and the improved I-65 Kennedy Bridge – climbed more than 15 percent from the end of January to the end of March.

There were more than 2.2 million crossings of the tolled bridges in January. That number climbed to nearly 2.6 million during March.

Nearly 10,000 more vehicles crossed tolled bridges during an average weekday in March as compared to January, an increase of more than 12 percent. The average number of weekend crossings was up nearly 24 percent from January to March.

RiverLink is all-electronic tolling, with no stopping, no slowing, no lines and no coin machines. Toll rates range from $2-$12, depending on the size of the vehicle. Drivers with transponders pay the lowest toll rates. The difference is $2 per crossing. It costs $2 to cross a tolled bridge in a passenger vehicle with a prepaid account and transponder and $4 without. 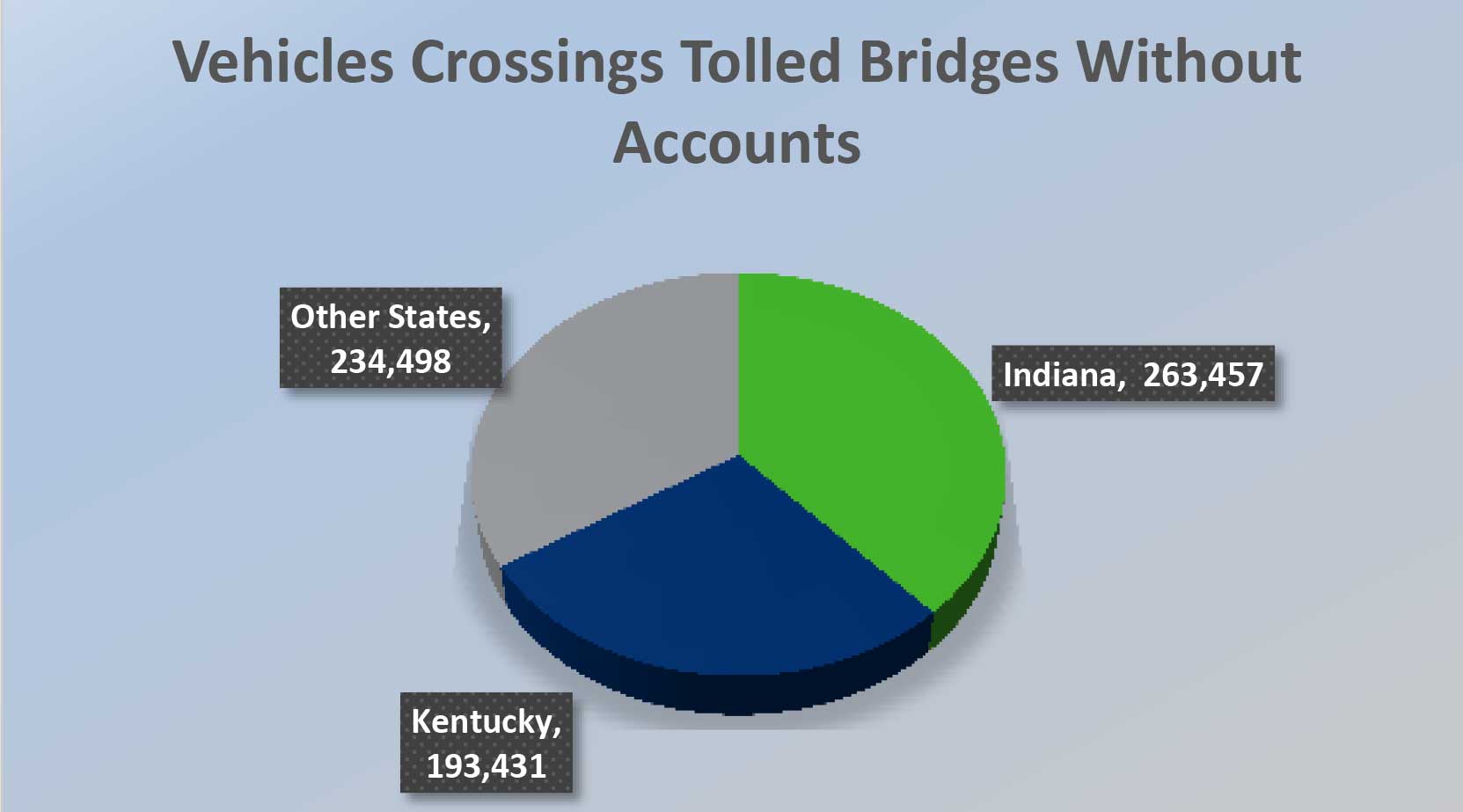 For drivers without prepaid accounts and transponders, cameras capture an image of the license plate and an invoice is mailed to the registered owner of the vehicle. There’s no need for driver to take any action until the invoice arrives. Initial invoices are for tolls owed, and do not include any penalties.

Invoices can be paid online, by mail, by phone or in person at a RiverLink customer service center. Drivers who do not pay tolls on time will be charged additional fees and may face restrictions on vehicle registration until tolls and penalties are paid.

Revenue numbers are preliminary for the first quarter. At the end of the first quarter, $8.6 million had been collected and split evenly between Indiana and Kentucky. An additional $6.8 million will be received from E-ZPass systems in other states (drivers who crossed the tolled

Ohio River bridges with E-ZPass transponders from other states). The billing cycle is still active, and additional money is being collected from vehicle owners who have received invoices.

Vehicle owners have 30 days to pay the first invoice without any additional fees. A second invoice includes a $5 administrative fee, and vehicle owners have 20 days to pay the invoice. A third invoice includes a $25 violation fee, and drivers have 30 days to pay the bill. If the invoice is still not paid, the bill moves to collections and a $30 collections fee is added. Vehicle owners in Kentucky and Indiana who do not pay their tolls may face restrictions on vehicle registration until tolls and related fees are paid.
Revenue collected to date is in line with expectations, and both states are meeting their financial obligations for the Bridges Project. Toll revenue can only be used to meet financial obligations of the project and for operation and maintenance of the project area.

Traffic on the three tolled bridges is expected to continue to increase in the coming months, especially during the busy summer travel months. Combined traffic on the three bridges has topped 100,000 vehicles on three recent dates: March 24, March 31 and April 7, Friday travel days during the spring break season for area schools.

Residents should prepare out-of-town guests visiting for the Kentucky Derby or passing through the area this summer. If they decide to open a RiverLink prepaid account, they will save money on each crossing.

Drivers can open a personal account online at www.RiverLink.com or by phone at 855-RIV-LINK. A personal account can include up to four vehicles, with a minimum balance of $20 to open an account. RiverLink transponders are mailed, free of charge, to account holders. The account balance rolls over month to month.

All E-ZPass transponders, including the I-PASS from Illinois and the Indiana Toll Road E-ZPass work with the RiverLink system. No further action is necessary.