A Year of RiverLink Tolling, A Year of Growth

The first year of tolling on three bridges connecting Louisville and Southern Indiana saw significant growth in the number of RiverLink prepaid accounts and the number of RiverLink transponders requested. Nearly 150,000 RiverLink prepaid accounts were opened in the first year of tolling and nearly 335,000 transponders requested.

“We’re encouraged to see both the number of RiverLink accounts opened and transponders requested nearly double in the first year of tolling,” said Megan McLain, innovative finance manager with the Kentucky Transportation Cabinet. “But, we want to see more drivers crossing the bridges with transponders in this second year of tolling. Having a prepaid account and transponder is the easiest and most cost-effective way to cross a tolled bridge. It saves drivers money.”

“Increasing the number of drivers using prepaid accounts and transponders is only one goal for the new year,” said Scott Adams, Indiana Department of Transportation director of tolling for the Ohio River bridges. “There have been successes in our first year of tolling, but there have also been challenges. We’re always learning from those challenges, listening to our customers and working to improve our tolling system.”

Several improvements are underway, including adding more customer service representatives, a proactive assessment of the tolling system and additions designed to improve the customer experience.

An additional training class for customer service representatives was completed earlier this month, with another class currently underway. The training classes are in addition to nearly two dozen new agents added at the end of the year. In total, nearly 100 customer service representatives are expected to be answering calls by mid-February. Additional agents will be trained and added, as needed.

Another improvement will offer online conversion to customers who owe tolls and choose to open a prepaid account. If an account is opened and transponder requested, tolls owed are lowered to transponder rates and fees are waived. The conversion offer is only available before an account reaches collections status (fourth toll notice). Currently, customers have to talk to a customer service representative to convert to a prepaid account. The option will soon be available online at www.riverlink.com.

Another major improvement on the way is a “pay-by-plate” option. The option is being developed and is expected to be in place this summer. It will allow customers without prepaid accounts to pay a toll without waiting for an invoice. Drivers will be able to use their license plate number and other authenticating information to pay tolls online.

Crossings remained consistent on all three tolled bridges, the I-65 Abraham Lincoln Bridge, I-65 Kennedy Bridge and SR 265 Lewis and Clark Bridge.

The number of drivers crossing tolled bridges with transponders increased two percentage points from the third quarter to 63 percent in the fourth quarter.

The number of RiverLink prepaid accounts and the number of transponders requested continued to grow at a steady pace.

The number of RiverLink prepaid accounts increased nearly 10 percent in the fourth quarter to nearly 150,000 accounts. Nearly 335,000 transponders were requested in the first year of tolling.

For drivers without prepaid accounts and transponders, cameras capture an image of the license plate and an invoice is mailed to the registered owner of the vehicle. There’s no need for drivers to take any action until the invoice arrives.

Initial invoices are for tolls owed, and do not include any penalties. An invoice is mailed to the registered owner of the vehicle. It’s important the owner of the vehicle has his current address on file with the Bureau of Motor Vehicles and County Clerk’s Office, as required by law.

The number of drivers who qualified for the frequent-user discount was consistent the first three quarters and dipped in the fourth quarter, averaging around 6,200 drivers per month. Fewer people likely qualified for the discount because of fewer crossings made during the holidays and time off work.

The frequent-user discount is an automatic credit after 40 trips are posted on any of the three tolled bridges in a calendar month. The credit is 50 percent, and each additional trip that month is also discounted 50 percent.

Increases in the time to answer a call were tied to significantly higher call volumes that coincided with the announcement of upcoming vehicle registration holds for drivers owing back tolls and fees and two isolated invoicing issues. Both issues were quickly identified and appropriate credits issued to customers. Monitoring processes were reviewed and strengthened.

Through the end of last week, the average time to answer a call in January was 4:21 with nearly 28,000 calls received. 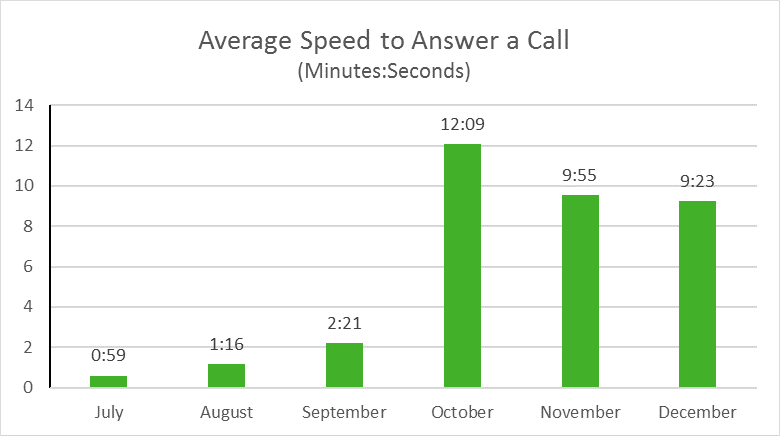 Revenue numbers are preliminary for the fourth quarter. In the fourth quarter, nearly $23.7 million was collected and split evenly between Indiana and Kentucky. An additional $3.4 million will be received from E-ZPass systems in other states (drivers who crossed the tolled Ohio River bridges with E-ZPass transponders from other states).

The billing cycle is still active, and additional money is being collected from vehicle owners who have received invoices.

Since the start of tolling on Dec. 30, 2016, more than $80.1 million has been collected and split evenly between the two states.