Callers connecting with customer service faster than ever

Crossings on the three tolled bridges connecting Louisville and Southern Indiana reached new highs in the second quarter and the time it took to connect with a customer service representative reached an all-time low.

There were 8.4 million total crossings on the bridges in April, May and June. This was the first time quarterly crossings topped 8 million. There were more than 103,000 average weekday crossings on the bridges in June, marking the first time the monthly average topped 100,000 crossings. In the second quarter of the year, the average time it took to answer a call to customer service was 20 seconds, the best quarterly average to date. 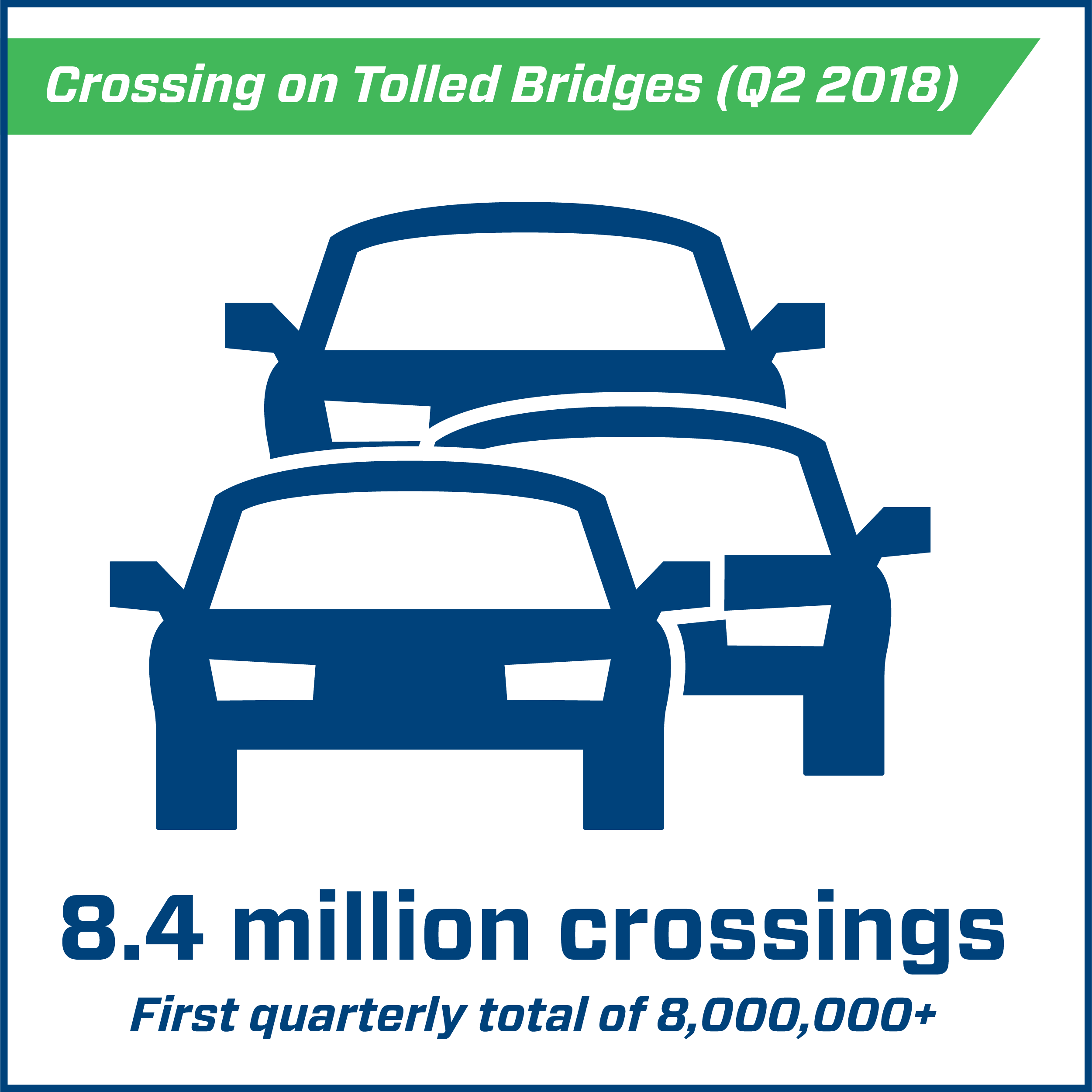 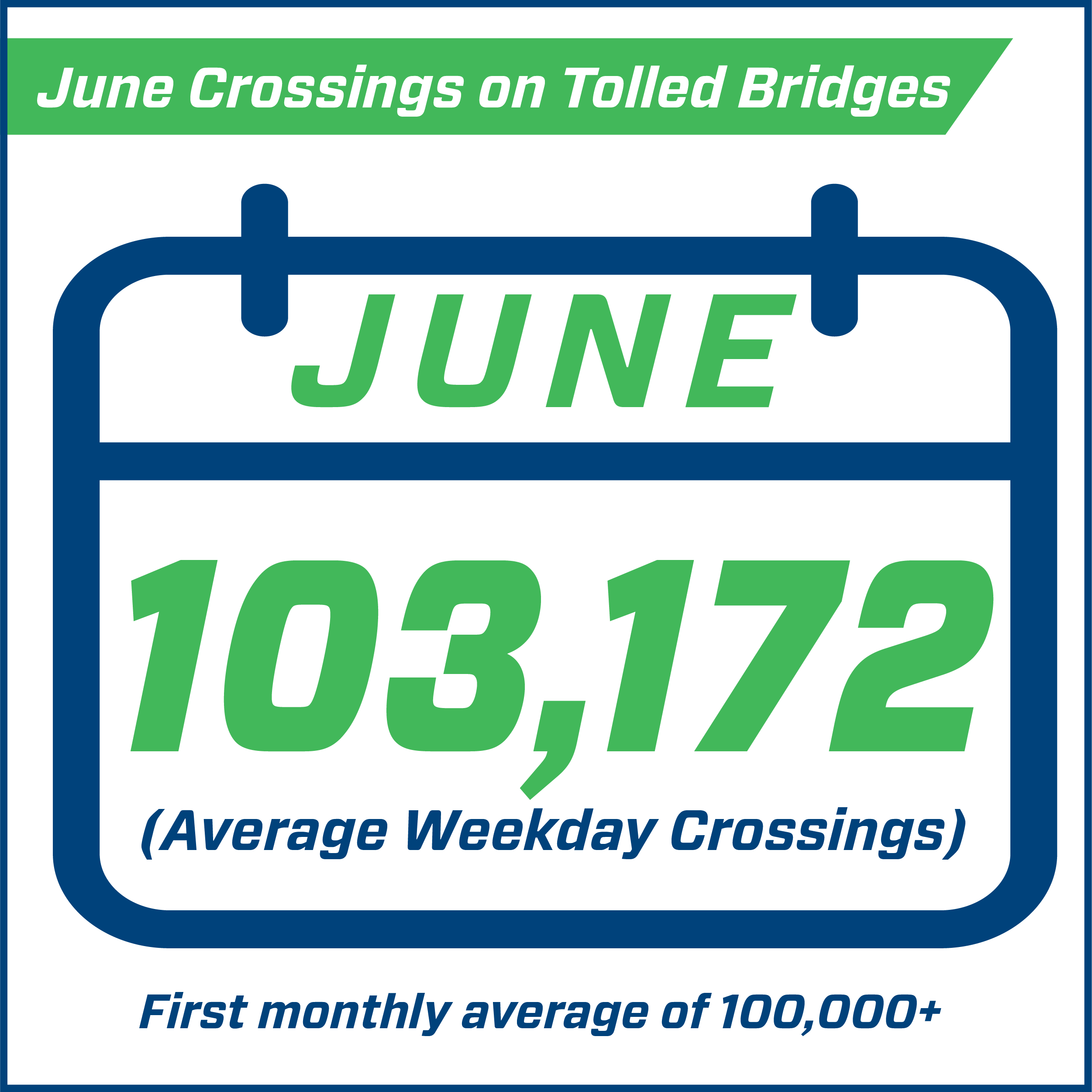 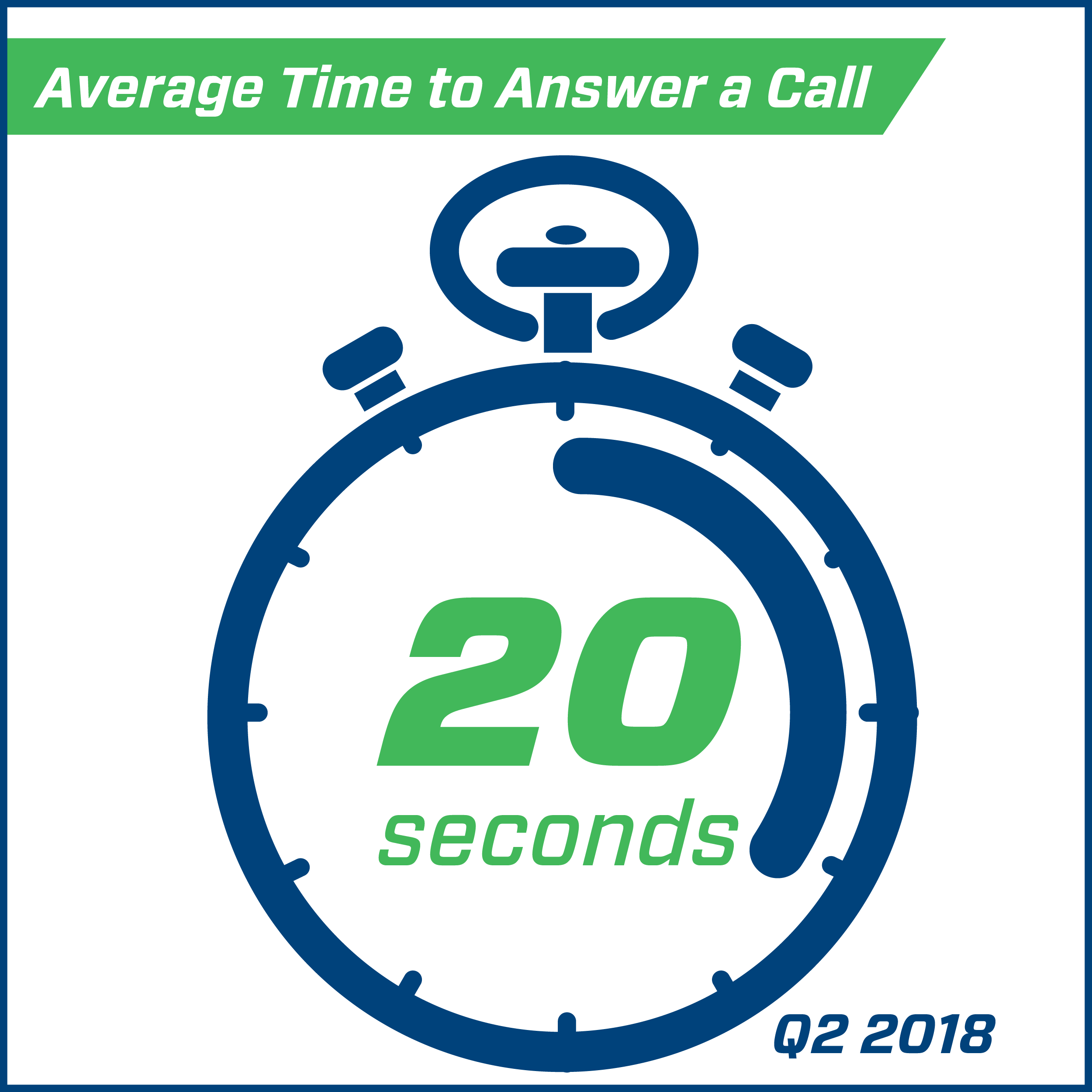 “Adjusting to a new tolling system takes time,” said Scott Adams, Indiana Department of Transportation director of tolling for the Ohio River bridges “Many drivers in our area have been introduced to all-electronic tolling for the first time, and the Lewis and Clark Bridge provides a new connection. Only 18 months into tolling, we’re seeing more drivers enjoying safer and faster commutes on the bridges and people needing assistance are connecting to customer service faster than ever before.”

“We’re continuing to see more drivers open prepaid accounts and get transponders, and that’s saving drivers money,” said Megan McLain, innovative finance manager with the Kentucky Transportation Cabinet. “We started online account conversion early this year, and thousands of qualifying drivers have taken advantage of the offer. Those drivers have saved significant amounts of money with tolls lowered to transponder rates and late fees waived, and they’re continuing to save every time they cross a tolled bridge.”

The one-time conversion offer is only available before an account reaches collection status (fourth toll notice). More than 5,600 drivers have taken advantage of online conversion since late February. Drivers have saved an average of more than $100 each, with savings to date totaling nearly $600,000 (includes tolls reduced and late fees waived). 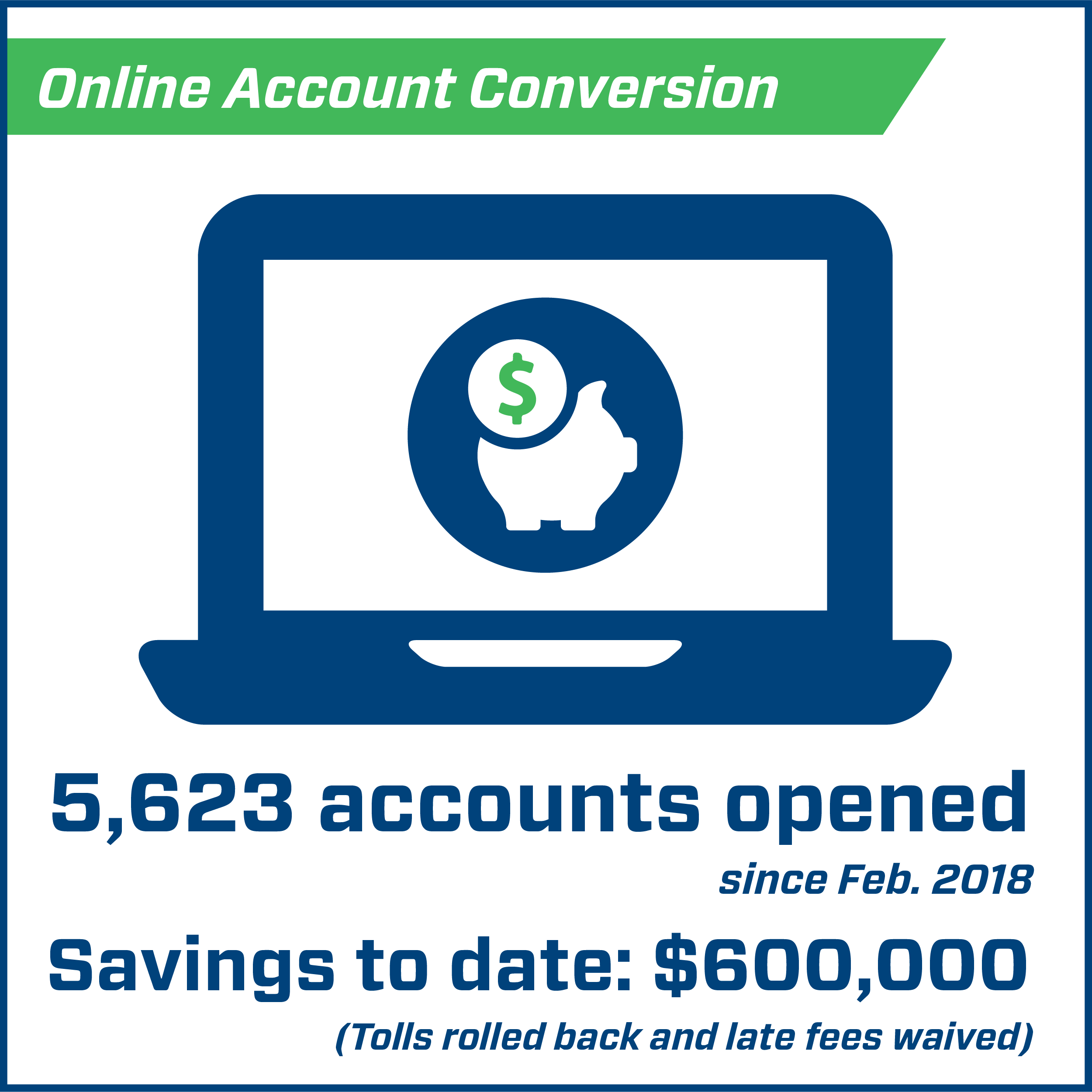 More vehicles crossed tolled bridges in the first and second quarter of 2018 (compared to the same time last year).

Total crossings in the second quarter were up 20 percent from the first quarter of the year.

The number of drivers crossing tolled bridges with transponders increased two percentage points in the first quarter of the year, but dropped two percentage points in the second quarter. Crossings typically increase during the busy spring and summer travel months. Some of those drivers are traveling through the area and are not as familiar with all-electronic tolling and the benefits of having a prepaid account and transponder. 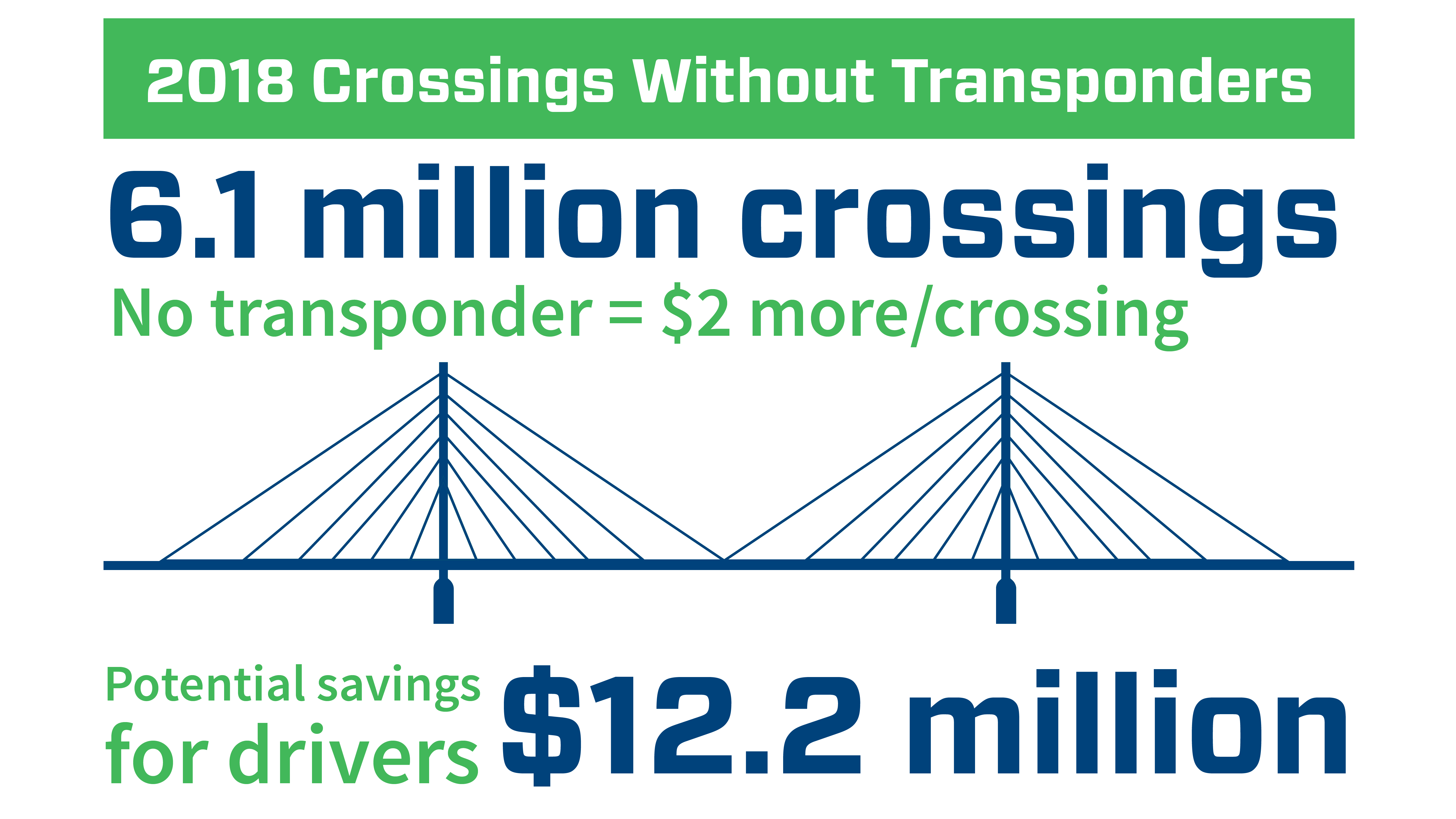 From January to June, 6.1 million crossings were made without transponders. If these drivers had prepaid accounts and transponders, they could have saved $2 per crossing. The potential savings total more than $12 million. Having a prepaid account in good standing and transponder is the most cost-effective and convenient way to cross a tolled bridge.

Another major improvement is expected later this year with the addition of a “pay-by-plate” option. It will allow customers without prepaid accounts to pay a toll without waiting for an invoice. Drivers will be able to use their license plate number and other authenticating information to pay tolls online.

Revenue numbers are preliminary for the second quarter. In the first two quarters of the year, $51 million was collected and split evenly between Indiana and Kentucky. An additional nearly $4 million will be received from E-ZPass systems in other states (drivers who crossed the tolled Ohio River bridges with E-ZPass transponders from other states).

The billing cycle is still active, and additional money is being collected from vehicle owners who have received invoices. Since the start of tolling on Dec. 30, 2016, more than $131 million has been collected and split evenly between the two states.